As a comprehensive IT Service Management (ITSM) solution, SysAid consists of two basic, tightly integrated components: Service Desk and Assets Management. Implementing IT Asset Management (ITAM) may be a challenge in a multi-site organization, especially when ITSM is implemented as a cloud service. Attempts to discover and monitor the network from outside the organization will encounter inevitable obstacles due to the local firewall and network utilization.

To resolve these issues, SysAid places a type of proxy, called the SysAid Remote Discovery Service (RDS), in the local network where assets are located. The RDS is the only node on the local network that communicates directly with the SysAid server or cloud. It performs all monitoring, inventory discovery, agent deployment, and LDAP integration processes locally at remote sites, and then communicates all the necessary data back to your SysAid server or cloud. Using RDS ensures that all the network traffic generated during network discovery and monitoring is local traffic. This results in reduced network latency and bandwidth usage, and increased reliability. SysAid RDS does not require you to open ports on your local firewalls, and it transmits all data to the SysAid server or cloud through the internet.

Note: For optimal performance, we recommend that networks with 20 assets or more use RDS nodes. An individual RDS node should be used for up to 2000 assets. For more information, see System Requirements.

If your RDS is using SysAid Patch Management, ensure port 1070 is opened for communication on the RDS for the target assets.

You can install RDS onto as many hosts as are necessary for network discovery and monitoring.

The RDS you've just installed appears in SysAid under Settings > Network Discovery > RDS. More information about this page can be found here.

After installing SysAid RDS, you can use it for all network discovery functions available from within SysAid.

After installing the SysAid RDS, you can use it to bridge the communication between your LDAP server and the SysAid server, eliminating the need to open ports in the local firewall.

To resolve these challenges, SysAid RDS is deployed locally on a computer at each company location where it is:

The deployment includes a web server that is used to communicate with computers that have the SysAid agent installed. RDS can perform SNMP and WMI network scans, agent deployment, LDAP integration, as well as collect monitoring data from computers. Furthermore, RDS collects and distributes all messages from the SysAid server that are intended for local computers (such as remote control requests).

All SysAid agents send their inventory and monitoring data to their respective RDS. RDS optimizes the data for transmission and then sends it to the SysAid server in a manner that maximizes network efficiency. In the event that a particular RDS deployment is unavailable, all communications that would normally be handled by RDS go directly to the SysAid server instead. 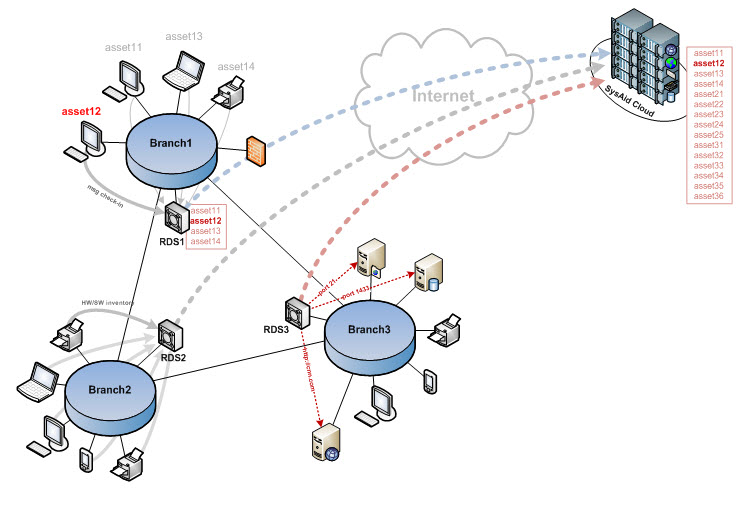 SysAid RDS handles all local network discovery functions. This includes WMI scanning, SNMP scanning, deploying the SysAid agent, and managing hardware inventories. All collected inventory data is sent by RDS to the SysAid server. If there is a lot of data to be sent at once, RDS optimizes the data transmission by fragmenting data and sending blocks.

RDS sends an inventory report to the SysAid server

SysAid RDS can also upgrade the version of the SysAid Agent deployed to your computers when a new Agent version is released.

All local monitoring data is reported to RDS, and RDS then sends that data to the SysAid Server. For ping testing, RDS initiates the ping, and for port testing and URL testing, RDS tries to contact the port or URL.

By performing monitoring tests locally from RDS, the communication problems caused by firewalls are eliminated.

SysAid RDS acts as a bridge for all LDAP processes, such as importing users, user authentication, and Password Services functions (reset LDAP passwords and unlock LDAP accounts). For example, when SysAid imports users from LDAP, the RDS fetches the needed data from LDAP and then transmits it to the SysAid Server, eliminating the need to open ports in the local firewall. All password related communication between the SysAid RDS and the SysAid server is encrypted. To secure all communication, ensure that the RDS communicates with the SysAid server using https in the server URL.

If you need to change the designated RDS, you may do so from Assets > Asset Management >Asset list using list actions.

Set Proxy settings on the RDS

To configure the Proxy settings on your RDS

When you finish, the file should look something like this example: