The Agent Deployment Plan list displays all of your plans for scheduled agent deployments.

To view or edit an existing deployment plan, click its row in the list to open the Agent Deployment Plan form.

Click More Actions to open a window with the additional Deployment Plan fields. Select one of these fields, and then choose the desired value for that field from the adjoining drop-down list. Click Save to update each of the selected plans with the new field values. 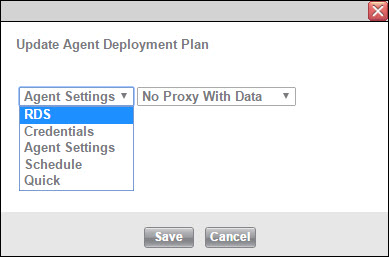 Before deploying the agent, the following ports must be opened between the deploying computer and the target computers: TCP 139, TCP 445, UDP 137, UDP 138, and UDP 8193. After the agent is deployed, only port 8193 must be kept open*. The other ports are only used in the deployment process. You must also ensure that the following three services are running on each computer you are deploying to:

Deploying to Linux and Mac: You must ensure that SSH is running on the target computers.
Deploying to Leopard (Mac OS X 10.5): After deploying the agent, you must restart the computer for the agent to begin working.