Every single list in SysAid can be customized. This page allows you to customize these lists. Any changes made to a list here will affect that list in every place it appears throughout SysAid.

Note: Certain special lists, such as the Company list or Assigned To list, are edited in other parts of SysAid. 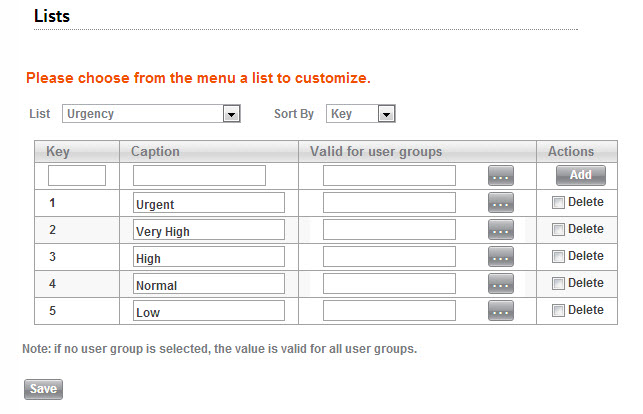 Tip: When building a list, use key values that are separated by 10, or even by 100. For example, first entry in the list is 101, second entry is 201, third entry is 301, etc. This way, you can insert additional entries in between if you need to.

To reorder a list:
For each list, you can choose to sort the list entries by key number (lowest to highest) or by caption (in alphabetical order).

To rename an entire list:
You can rename any list (e.g. SR Custom List 1) by editing the translation file. Go to Settings > Customize > Translation and then go here for further instructions.

The status list has two unique components: Class, and Incident/Request/Change/Problem checkboxes (ITIL module only).
Status Class can be Open, Closed, or Deleted/Ignore.

The Incident/Request/Change/Problem checkboxes (ITIL module only) determine whether a given status will appear in the status list in a change, problem, request, and/or incident. For example, the "Problem Identified" status is only relevant to problems, so it will not show up in the status list for requests, changes, or incidents.

The priority and urgency lists are linked; the entries in each list correspond to each other:

Please note that when SysAid matches an urgency to a priority, it does not use the key #. Rather, it simply counts down the urgency list until it reaches the desired entry, then counts down the same number of places in the priority list and chooses the entry there.

Any list that appears on this page can be translated into the language of your choice. To translate a list:

Please take note : If you have translated a list into another language, that list may appear differently under Settings > Customize > Lists than elsewhere in SysAid.

The status list as seen in the translation file 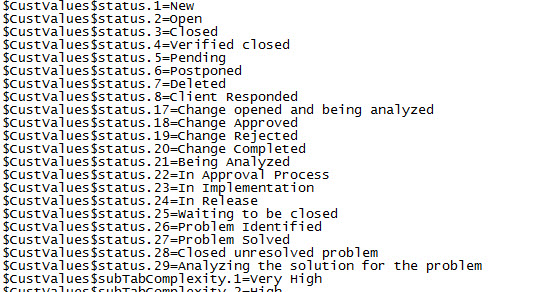